Crescent Bend Nature Park was once a residential neighborhood. In 1997 and again in 1998, this area was devastated by 100-year floods. Even though some residents wanted to rebuild, the area was designated a flood zone unsuitable for housing. Government agencies purchased the land and began the massive cleanup that took years to complete. The fate of this land was finally decided; it would become a park. The land ownership was transferred to Bexar County. The County has an agreement with the City of Schertz to manage the nature park for many years to come. The new park was opened to the public in September 2009. There are still reminders of the old neighborhood but nature has slowly reclaimed the park.

Crescent Bend is blessed with multiple habitats which supports the diversity of wildlife seen within the park. Cibolo Creek follows along the east and north boundaries providing an aquatic habitat and a riparian zone along the banks. The woodlands habitat began at the entrance of the park and covers more than half of the 170 acres, consisting mostly of pecan and hackberry trees. The woodlands slowly transitions into open savannas to the north and west ends of the park.

Since the park's opening, over 250 species of birds have been reported by Audubon groups and individuals. Eighteen of these species are considered rare sightings for Bexar County. The rarest species was the Ruddy Ground-Dove found in October 2012, which brought in hundreds of birders from across the southern US. With these rare sightings, Crescent Bend has become a birding hotspot in Texas. 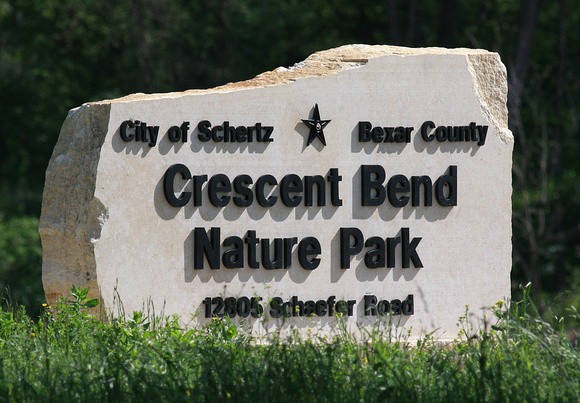