Visitors at Crescent Bend have noticed a big change to the park over the last several years. Some comment how the park appears to be dying or looks dead. Many visitors suggest cleaning up the park by removing the fallen and dying trees. Some of the once plush green woodlands and grasslands have slowly disappeared since the park’s opening in 2009. This “dying effect” has been caused by several years of drought experienced throughout most of Texas. The older trees of the park have been stressed by the lack of rain and slowly died, creating snags or mounds of rotting trees. With a prediction of future rains on the way, the nature of the park will rebound and regenerate over the coming years. In the meanwhile, there are many positives during the transition.

Crescent Bend has becoming a rich, inviting habitat for many species that specialize in living among the dead. For what appears to be dead is now providing new shelters and food sources for different species to thrive. One family of birds in particular is the Woodpecker.

Fourteen species of woodpeckers can be found in the state of Texas, some being rare or unusual sightings for the state. Some species are only found in the western or the eastern parts of the state. In central Texas, there is a greater possibility of sighting some of these species as they migrate between summer and winter territories. From the fall of 2011 to the winter of 2016, ten species of woodpeckers have been found at Crescent Bend. This is a claim only a few Texas parks can make.

At Crescent Bend, there are three woodpecker species found year-around. The Golden-fronted Woodpecker makes Texas and Oklahoma its home. The Ladder-backed Woodpecker can be found in the southwestern states from Texas to California. The Downy Woodpecker is more widespread and found in every state in North America.

During the fall, two species migrate to the south into the park and stay until spring. The Yellow-bellied Sapsucker spends the winters in the southeastern states. The Northern Flicker can be found year-around throughout most of the U.S. except in a few areas of southwestern states where they migrate in to spend the winter.  The Northern Flicker is divided into two subspecies, yellow-shafted and red-shafted. They are known to interbreed and known as hybrids of the subspecies. All three have been found at the park during the winter.

There have been five additional woodpecker species found within Crescent Bend. These sightings are considered rare for Bexar County and are some of the best documented cases for the county. These rare woodpeckers are not just one-day wanders. Most arrive and stay to make a home at Crescent Bend.

A female Red-naped Sapsucker was first sighted at the park on October 30, 2011. This species is normally found in the far western parts of Texas and other western states. This rare sapsucker was sighted again on several occasions and last reported on December 27, 2011.

A male Pileated Woodpecker was first sighted on October 21, 2013. This species is normally found in eastern Texas and other eastern states. This male was seen by many observers over a four month period throughout the park. The last sighting was February 20, 2014.

A female Red-bellied Woodpecker was first sighted on October 19, 2013. This species is normally found in eastern Texas and the eastern half of the U.S. This female was very active through the winter months and last seen on April 10, 2014.

A juvenile Red-headed Woodpecker was first sighted on November 4, 2014 and seen again by several observers on November 6th.  This species is normally found in eastern Texas and the eastern half of the U.S.

The newest addition is the Red-naped x Red-breasted Sapsucker hybrid seen from November 20, 2016 through January 14, 2017. This is only the third reported sighting of this hybrid in Texas. The Red-breasted Sapsucker has a range along the west coast in Arizona, California, Oregon, and Washington. The Red-naped Sapsucker has a range in the western US, and far west Texas, and is considered rare in most of Texas. The two species will breed together where their ranges overlap.

Visit the gallery to view photos of the Woodpeckers of Crescent Bend. 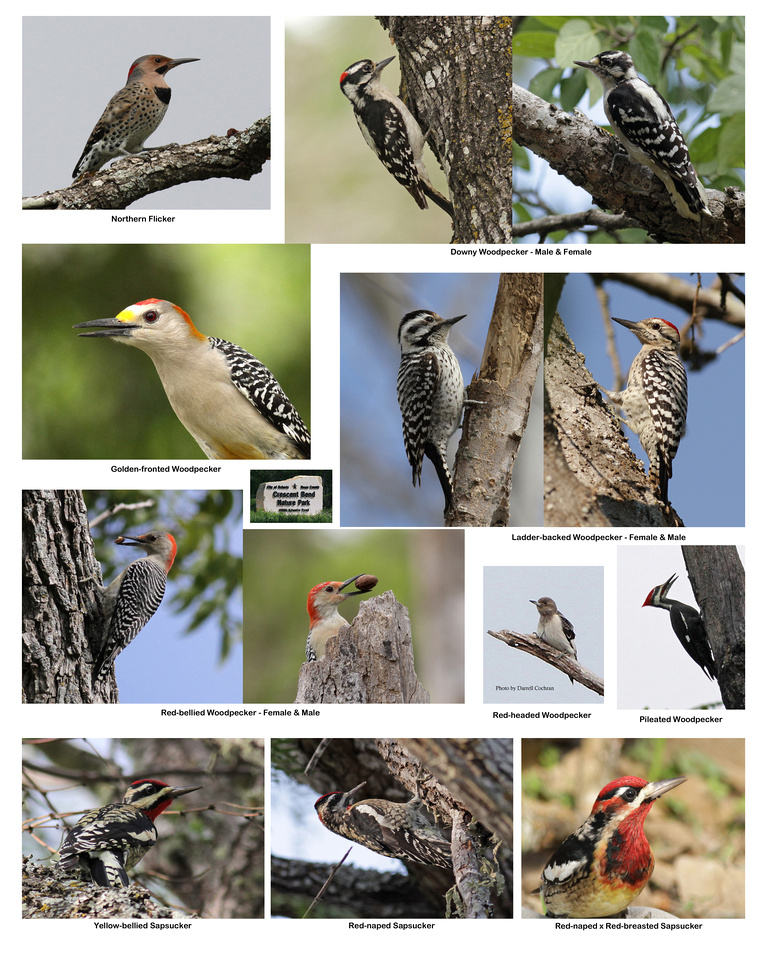